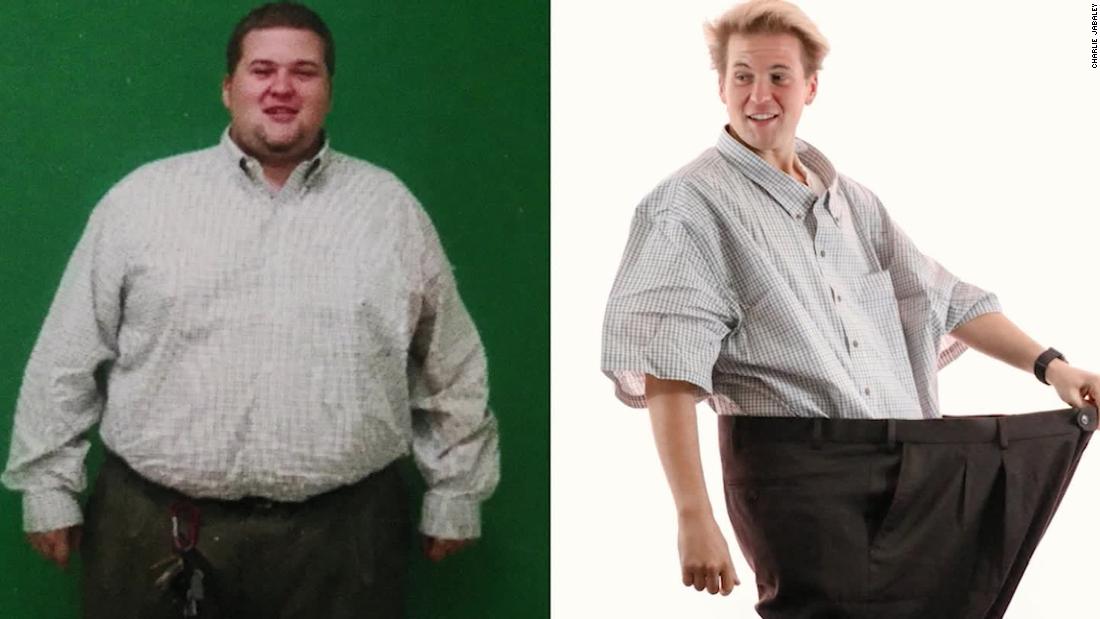 (CNN)Charlie Jabaley is a man of extremes: a self-made millionaire, an athlete who biked across the country and a former brain tumor patient who once weighed 300 pounds.

Along the way, the 30-year-old has been open about his personal turbulence, hoping his struggles will inspire others.
“When I became successful in business, I was fortunate enough to become a millionaire. But when I got sick, that meant absolutely nothing to me. I told myself, ‘I want to become a new type of millionaire, one that transforms a million people’s lives.’ “

The many lives of Charlie Jabaley

Jabaley puts on his bike helmet, adjusts the straps and takes off. Rocket images adorn his shoes. He transforms into the alter ego that saved his life. He calls it “Charlie Rocket — the second-chance superhero,” dedicated to inspiring people to live healthy lifestyles.
Jabaley describes the different phases of his life as character roles. Today, he’s “Charlie Rocket,” but once he was “CEO Charlie,” an adolescent brain tumor survivor and budding music mogul hoping business acumen would compensate for his obesity.
By his late 20s, he was a hip-hop titan. It was not an act. Jabaley built a multimillion-dollar music and artist management company called Street Execs. His artists included 2 Chainz and Travis Porter. He was the creator of the instant viral Christmas success “Dabbin’ Santa Sweaters.”
“CEO Charlie” was at the pinnacle of success, but his problems didn’t go away.
“The bigger my business got, the bigger I got,” Jabaley recalls.
“I knew this gas station had this type of cookie and that gas station had the Krispy Kreme doughnuts.” He spent entire nights bingeing on junk food. “I would be eating it in my car as I’m driving to the next one.”
Jabaley estimates that he consumed more than 10,000 calories on those nights.
“My skin would be bruised all over, and my shirt wouldn’t fit from the night before.”

Charlie’s wake-up call came when his childhood brain tumor returned. It grew around the top of his spine and surrounded his left optic nerve.

Never one to do things halfway, Jabaley made several drastic changes. (His upcoming book is titled “The Life and Death of CEO Charlie.”)
He left his company and moved to California. He adopted a plant-based diet. He started training with his best friend, Scott Cameron, who challenged him to run his first marathon. Running gave Jabaley something to be proud of, and that, along with his eating habits, resulted in a 120-pound weight loss within a year. He felt great. His brain tumor was under control.

Jabaley made a contract with himself to pursue his dream of becoming an athlete. While he was at it, he planned to touch a million people’s lives. Four marathons and an Ironman Triathlon later, he set out on his Dream Machine Tour, a bike ride from Los Angeles to New York. He wanted to inspire people to pursue their dreams with vigor. He wrapped up the cross-country ride this week.
It’s not clear how many people he affected, but Jabaley is well on his way to becoming a different kind of millionaire, and fulfilling his ultimate role as inspiration to others.