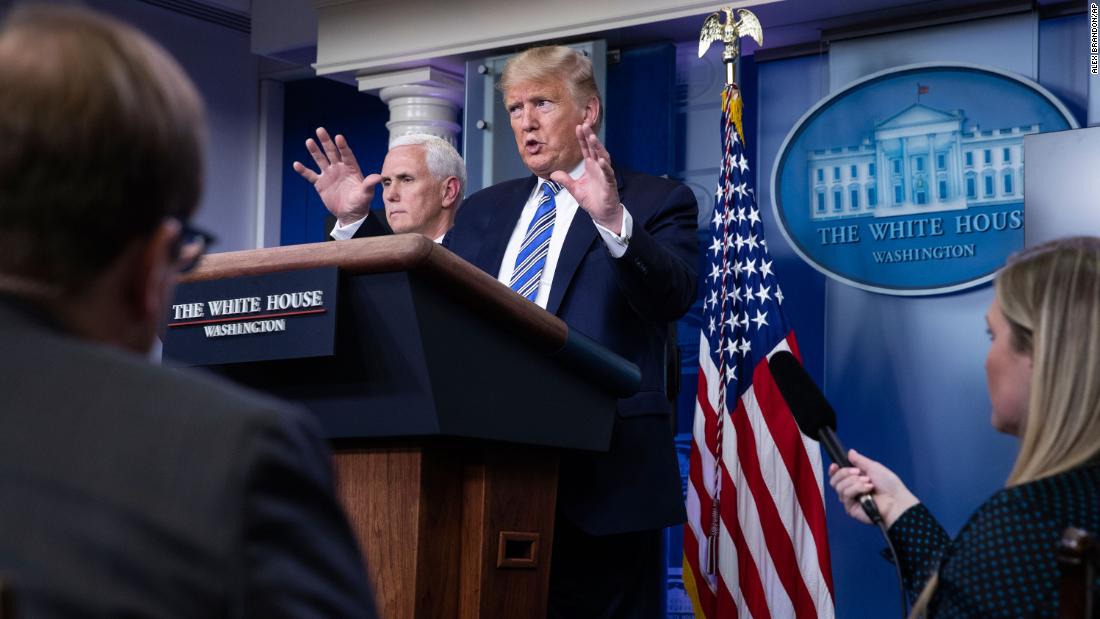 New York (CNN Business)A version of this article first appeared in the “Reliable Sources” newsletter. You can sign up for free right here.

At the briefing, Trump said he didn’t want a medical problem to become an economic problem, seemingly disregarding the fact that the two are closely linked. The President added that decisions on how to tackle the pandemic should not solely be left to medical professionals. “If it were up to the doctors, they may say, ‘Let’s shut down the entire world,'” Trump said, adding, “You know, we can’t do that.”
That line of thinking sounded awfully similar to what Fox personalities have started to argue. “Our ruling class and their TV mouthpieces — whipping up fear over this virus,” Fox host Steve Hilton said Sunday. “They can afford an indefinite shutdown. Working Americans can’t, they’ll be crushed by it.” On Monday morning, Laura Ingraham tweeted that doctors “should not be the determinative voices in policy making now or at the end of 15 days.” And Larry Kudlow appeared on Fox to argue that “the cure can’t be worse than the disease.”
Even Tucker Carlson, who has been one of the voices on Fox that has taken the coronavirus seriously, said, “You can’t just let epidemiologists run a country of more than 320 million people.” Carlson said it was “vital” to find a “balance” between fighting the virus and allowing the economy to function. Carlson later hosted Texas Lt. Gov. Dan Patrick who suggested grandparents “take a chance” on their “survival” in “exchange for keeping the America that all America loves for your children and grandchildren.” Patrick said, “If that’s the exchange, I’m all in.”

Over at WaPo, the newspaper reported Monday that Stephen Moore and Art Laffer— two Fox regulars — have also been “lobbying the White House for more than a week to consider scaling back the recommendation that restaurants, stores and other gathering spots be closed.” Moore told WaPo, “From my sources, the view in the White House is shifting toward getting the economy reopened.”

There is some dissent

Not everyone at Fox is on board with Trump’s idea. Fox Business reporter Charles Gasparino, who is often blunt in his assessments of the President, pushed back against the idea of ending the shutdown. Gasparino said “the hospital systems” can’t likely “take the flood of patients” that will need to be admitted if those policies are lifted. “They haven’t been prepared because, essentially, central government was downplaying it for so long,” Gasparino added.

MSNBC host Chris Hayes tweeted Monday, “I’m watching the ‘just let the virus do it’s thing and keep the economy humming’ school of thought grow on the right. And it seems worth noting something crucial.” Hayes wrote, “Just think of the economics of this: if you stopped lockdowns, and sent everyone back to work, lots and lots of people would get sick. You’d have workplaces where half the staff were out. And this would roll through all kinds of places, people who maintain the electrical grid and water treatment and sewage systems, etc.”
“Not only that, as the hospitals filled up and horror stories emerged, you’d have tons of deaths from things other than Covid-19 that couldn’t get treated,” Hayes added. “This would make ppl more scared of getting the bug and lead to further retreat. Which is to say, even if you care about economic activity as the only value here, it’s really not clear that anything like ‘business as usual’ is even a possibility in the midst of a roaring pandemic, even if you let everything stay open.”

Trump to do Fox town hall

I would expect that questions about the shutdown and what will happen at the end of the 15-day period will arise Tuesday when Trump and members of his coronavirus task force join Fox for a virtual town hall. The event is set to take place at 12pm ET and will be moderated by Harris Faulkner and Bill Hemmer. Doctors Marc Siegel, Nicole Saphier, and Mehemet Oz will also join…

— Sean Hannity on Monday night read Mike Pence a letter from an unidentified doctor that detailed a specific “regimen” of drugs he said has resulted in “zero deaths” from coronavirus… (Media Matters)
— As Fox News hosts and personalities were downplaying the coronavirus, Rupert Murdoch took a measure to protect himself: He canceled a planned party to celebrate his 89th birthday on March 11 at Moraga Vineyards… (NYT)
— A day after Ben Smith’s piece on Fox, and how it failed viewers with coronavirus coverage, the network’s biggest talking heads (Tucker Carlson and Sean Hannity) took time out of their shows to lash out at media for pointing out what Fox’s biggest personalities said on the topic for weeks…
— Speaking of which, the Lincoln Project compiled a brutal montage showing EXACTLY how Fox misled its viewers on the coronavirus… (Lincoln Project)
— Broadcasting from a home studio, Joe Biden addressed the nation on coronavirus via live-stream. “Trump keeps saying that he’s a wartime President,” he said. “Well, start to act like one…” (WaPo)
— BUT, Biden’s address “offered a reminder of the continuing challenge he faces in getting attention, even when he does speak out. CNN, Fox News and MSNBC did not air his speech, instead showing a briefing by [Gov. Andrew Cuomo] of New York…” (NYT)
— Poynter asks, “Do news sites have an ethical duty to remove paywalls on coronavirus coverage?” (Poynter)
— HuffPost will host a coronavirus live interview with one of its public health contributors, Kathryn Jacobsen, a professor who specializes in global epidemiology… (HuffPost)
— The coronavirus pandemic has been a boon for Facebook, with the social platform recording record levels of messaging and video calls. Additionally, NYT reported, “As of Thursday, more than half the articles being consumed on Facebook in the United States were related to the coronavirus…” (NYT)
— At the daily White House coronavirus briefing, Trump took a swipe at the “angry media…” (Mediaite)